But on a Tuesday during the Autumn term I got to go up to the big city and teach the new ITT trainees at a university.  I was asked to take a session with the science trainees on improving numeracy.

This session was aimed at aspiring science teachers and was a bit of a revelation for me.

The ITT trainees had impressive mathematical skills. One used to work the maths in a nuclear power plant – he had lots of great ‘check your working’ stories for what happens when you get your maths wrong. Another had studied feeding behaviour in higher primates, so they had a very impressive grasp on statistics and how to make it accessible.

However, while the trainees could do the maths, they struggled to explain how to do it, or to come up with another way to explain it if their first strategy did not work.

For those of you who like a bit of edu-terminology, the trainees mostly had learned maths as ‘strings’. Strings are ‘serial ordering, sequences, chains, simple associations’ and are described neatly in Hattie’s Summary of Knowledge Storage (Hattie & Yates, Visible Learning and the Science of How We Learn).

For example, if I were to ask you what letter came after ‘P’ in the alphabet, you would be able to answer ‘Q’ very quickly. You can access this quickly because you have learned the alphabet in order, so knowing what comes next is easy – Q follows P.

But if I were to ask you what was two letters before ‘P’ or what the 14th letter of the alphabet was, you would probably start at ‘A’ and count up on your fingers. This is because the alphabet for most of us is a string – we have learned it in a certain order. So when you need to access it you have to revert back to the beginning of the chain.

We want to encourage students to engage in ‘ideas’ instead of just engaging with strings. Ideas are linked at the conceptual level. Unlike strings, the idea is not tied to the vocabulary of a topic so it doesn’t matter if a student cannot recall the exact word forms used.

For example, consider the phrase:

‘A square is an example of a quadrilateral’ in English and then in German: ‘Ein Quadrat ist ein Beispiel für ein Viereck’.

If you were asked to learn both phrases and then write them down, in English you might write something similar to the sentence above, with the same meaning, but you might use slightly different words – you could express the ‘idea‘ without being tied to the exact vocabulary.

For the German phrase (assuming you are not a German speaker) you would be trying to remember the words, their spelling and their order, but you wouldn’t have the same insight into the ‘idea’ behind it. You are relying on ‘string’ memory, not memory of the idea.

In maths teaching, ideas are more robust and transferable than strings. If you teach ‘ideas’, you don’t need formula triangles, or mantras about cancelling out numbers or crossing the = bridge.

Let’s take look at some examples.

When the ITT trainees thought about teaching triangles, they started to think about what students might need to know. They thought about trigonometry, area and angles. They tended to consider completing questions on triangles, for example, working out the missing side length of a right-angled triangle, as a sign of understanding.

We talked about the ways that you can present triangle questions in a way that you encourage students to think about the underlying ideas, rather than carrying out routine procedures on repetitive exercises. 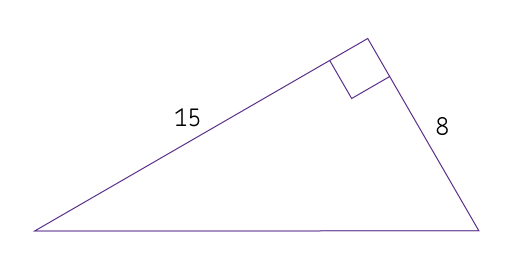 For example, if you give students 10 questions on working out the length of the third side of a right-angled triangle using Pythagoras, they may perform the task perfectly every time. But if you give them a question based on the same triangle in which they need to think about the appropriate method and what they are being asked to find out more deeply, then they are more likely to retain the knowledge.

Craig Barton has written about this in the past. He calls his approach SSDD (Same Surface, Different Deep) and it promotes students moving from strings to an understanding of the underlying ideas.

Nearly all of the ITT trainees mentioned formula triangles as a way to help students learn and use formula. But using formula triangles introduces an additional step at the start of the process where students are required to identify which of the three versions of the formula is the appropriate one to use, which puts them on shaky ground to start with. It suggests these three formulae are different and distinct.

Instead, why not teach them the idea that speed, distance and time are connected, along with one formula and the idea that it can be bent to their will to work out any one of the three variables?

It would be preferable if students were comfortable using one formula that makes sense to them. They can then rearrange that formula to suit the data they have been given. This then stops it being a recall exercise and instead makes it into a manipulation of an idea.